Although spices typically are present in foods only in low amounts, there have been outbreaks of illness in which spices or botanical ingredients were believed to be the vehicles for human pathogens. Raw botanical materials and extracts of botanical origin also are consumed in relatively small portions in dietary supplements and over-the-counter medicinal products containing plant-based constituents as the assumed active ingredients. The FDA reviewed the food safety concerns for these products in a publication entitled: Draft Risk Profile: Pathogens and Filth in Spices

JIFSAN is partnering with the India Spices Board, the Confederation of India Industry – Food and Agriculture Center of Excellence (CII-FACE), with the support of the US-FDA, in the development of a SCMSBI-CTI. One goal of the Center is to establish a cadre of in-house experts who can offer training in all aspects of food safety management throughout the supply chain.

An agreement was signed September 17, 2012 by JIFSAN, the Spices Board and CII-FACE to establish the SCMSBI CTI for the advancement of food safety in the spices and botanical ingredients industries. The concept of the center is to develop, through intensive training by JIFSAN and the FDA, a cadre of excellent resident trainers in the CTI who can train in food safety throughout the industry and the entire supply chain. Exporters will realize economic benefits of these efforts while domestic and international consumers will benefit from enhanced food safety. Activities in the CTI are being conducted in several Phases as follows:

In Phase I, Subject Matter Experts (SMEs) from JIFSAN and FDA traveled to India to offer basic food safety training focused on spices. The principles of GAP and GMP were emphasized. The Phase I program was held in Cochin, Kerala, India September 17-21, 2012. Participants in this workshop included representatives from the India Spice Board, CII-FACE, the Indian government, academia, spice processors, and spice growers. In addition to classroom lectures, two field trips to a farm and processing facility occurred mid-week. A key activity in the program was the selection of nine individuals who would participate in the Phase II internship in the US. The topics covered during Phase I can be seen on the SCMSBI Program Content page 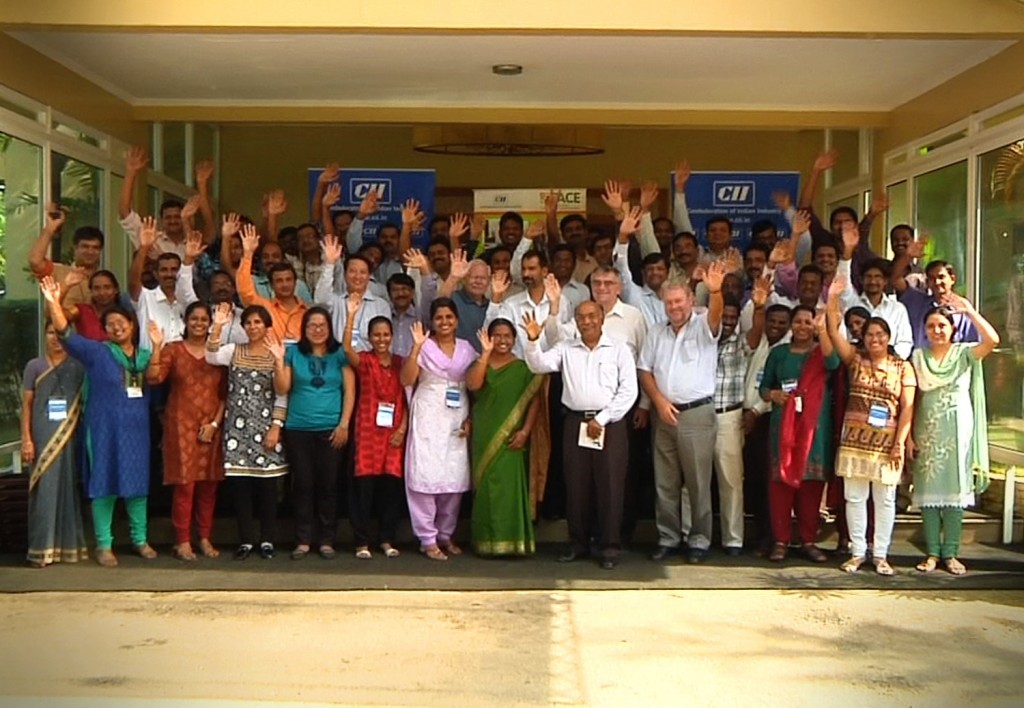 In the second Phase, the group of nine individuals who had been selected during Phase I for their superior skills as trainers traveled from India to the U.S. for advanced training March 25 through April 5, 2013 at the JIFSAN Training Center in College Park, Maryland. Instructors were recruited from JIFSAN, the FDA, industry, and trade associations for the intensive 6-day program. A field trip to a major food manufacturer was included. The group then traveled to the University of Mississippi's National Center for Natural Products Research for an additional 3 days of training on analytical procedures.

In both locations, the delivery for this workshop was facilitated by interactive discussion sessions, case studies and lectures on specific topics. On the first day of the workshop the discussion was dedicated to the identification of the steps in the supply chain for spices and botanical ingredients from the farm to the local or foreign markets. A complete list of the topics covered can be found on the SCMSBI Program Content page. 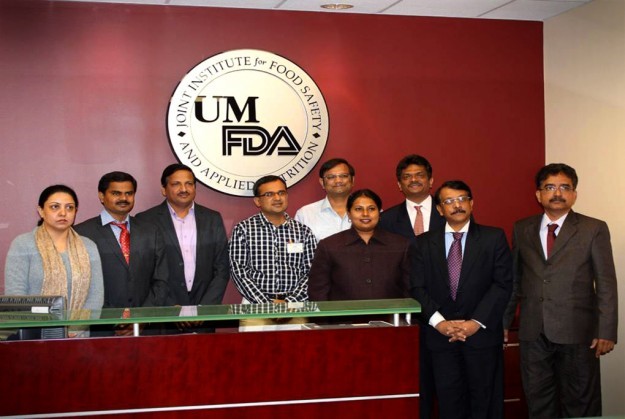 Phase III and additional phases of CTI activity require the trainers to refine and implement their own training programs in India directed to primary producers and subsequent handlers of the products. The CTI leaders began with a series of meetings with National/State Horticulture Mission officials in May and June, 2013 in the Southern, Central and Northern regions of India. Program leaders worked to sensitize Mission officials to food safety issues and to encourage them to join with the newly formed CTI to conduct food safety training. The responses from the meetings were highly encouraging. Additionally, the Spices Board India and CII-FACE wrote a manual on Food Safety and Supply Side Management of Spices and Botanical Ingredients that was published by the Spices Board India in September 2013. The manual includes sections on food safety issues in the supply chain; GAP for the production and handling of spices; managing food safety during transportation, storage, processing and packaging; as well as licensing and registration of food businesses in India.

Plans were laid by CTI to develop content for two-day Train-the-Trainer programs. Two of these were to be delivered in each state, giving a total of twenty programs. The goal was to train approximately fifty persons in each program so a total of 1,000 newly trained trainers were projected. In October, 2013 the first three programs were delivered to a total of 218 persons. The newly-trained participants were expected to branch out and deliver training programs to constituents in their region. This is the concept that has been advanced in JIFSAN GAP Train-the-Trainer programs for more than a decade. Phase III Program evaluation forms completed by course participants indicated that the methods and training materials were on-target. Going forward, the effectiveness of training will be monitored and evaluated not only for the purpose of measuring success but also with the intent of continuously searching for ways in which programs can be improved.

A side activity of the World Spice Conference, which convened in Kerala February 16-19, 2014, was to work with SCMSBI-CTI collaborators to discuss and develop a monitoring and evaluation (M&E) strategy to assist in understanding the impact of the Phase III training programs. The M&E activities are currently being piloted in collaboration with local partners involved in SCMSBI-CTI in India. This will enable the team to measure outcomes to determine the contribution of these programs to better livelihoods and health benefits. Assessment tools were piloted in the inauguration training program in the villages of Kaloor and Kaloorkad, Kerala led by Dr. Benjamin Mathew, Program Coordinator for the Santhanpara, Idukki District, who had previously been trained through the SCMSBI-CTI. Representatives from JIFSAN and NCNPR participated. The plan for the next year was to extend the training programs to a number of villages that were involved at critical stages in the supply chain of spices and botanical ingredients exported to the U.S. It is important to note that countries other than the U.S. also benefit from this initiative so the impact is expected to be far-reaching.

Multiple training programs in Phase III were conducted for different segments and stake holders of the supply chain in various spice producing states with a minimum target of two programs per state. The State Agricultural & Horticultural Departments were requested to form GAP cells with their Nodal Office in each state. Training was provided to eleven government groups in 2014 in the states of Kerala, Rajasthan, Tamil Nadu, Assam, Madhya Pradesh, Gujarat, Andhra Pradesh plus four industry programs in the states of Andhra Pradesh, Karnataka, Tamil and Nadu Kerala. The Spices Board India conducted 15 programs reaching a total of over 500 persons trained. Further, 10 additional programs were firmly planned and delivered through the first quarter of 2015. These were conducted in 10 different states in India focusing first on the most important spices-producing states.

Participants in training programs are being drawn from numerous sectors. The Spices Board reports participation from the India Department of Agriculture, Indian Council of Agricultural Research, University Researchers and Extension professionals, farmers' representatives, spices manufacturers and processors, and possibly other groups. Certainly the goal of raising awareness of food safety issues in the supply chain is being met in these programs.

JIFSAN is committed to ongoing support of Phase III programs. In March, 2016, two JIFSAN trainers (Rushing and Narrod) traveled to India to participate in the World Spice Congress in Ahmedabad. After the Congress they traveled with Spices Board Trainers to four remote areas to support the Board in the delivery of food safety training programs and to assist with the establishment of training cells in all locations. Approximately 193 persons were trained in Anand, Mandsaur, Ajmer and Bangalore. Program participants included growers and officials from government agencies and academia.

In February 2019, Rushing and Narrod again traveled to India and delivered presentations at the National Conclave on Food Safety in Delhi. From there they traveled to four distant locations (Mandsaur, Jodhpur, Mahesana, and Hyderabad) by plane, train and automobile to assist with the delivery of programs designed for low-literacy audiences. These training sessions were based up a manual entitled Food Safety for Farm Workers which had been developed by SMEs at JIFSAN. Various farms and industry handling facilities were visited for a review of food safety practices and to strengthen the ties between the Spices Board and its stakeholders.

Future activities of the CTI in India are likely to include training in Good Manufacturing Practices (GMP) for companies that process or otherwise handle spices products for export.

Anyone with interest in developing a similar program should contact JIFSAN at jifsan@umd.edu.